This series consists of serial coronal sections of the mouse brain (sectioned at 30μm and illustrated as 1 section in 3 (section-to-section spacing of 90μm)). Sections have been reacted by the Gallyas silver stain. The series begins at the level of the posterior medulla (brainstem) and posterior fourth ventricle. Comments made within this unit are selective, designed to highlight salient features and emphasize landmarks useful for thinking in 3-D space. 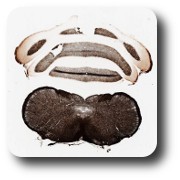 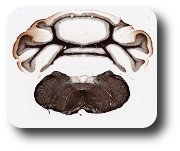 This section is overall similar to Section 1, with the notable addition of the inferior olive at the ventral midline. This nucleus, which appears pale in the myelin stain, gives rise to the climbing fibers, terminating on Purkinje cells in the cerebellum. The vestibular nuclei, near the dorsal midline, constitute another conspicuously myelin-pale region. In addition, compare, section 1:

In this section, the inferior olive is still in evidence, as a pale region ventrally. Axons originating from the inferior olive form the large middle cerebellar peduncles, en route to Purkinje cells in the cerebellum. The fasciculus cuneatus and f. gracilis have terminated in their respective nuclei. A new fiber tract, the medial lemniscus, originates from neurons in these nuclei and continues anteriorly to the thalamus. The corticospinal tracts can be identified at the ventral midline.